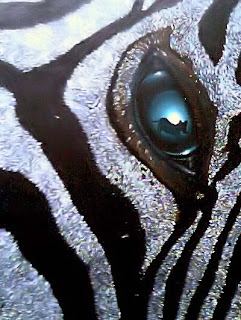 .
I really want to go to a forum and ask what people would buy ( animal painting ).
Some subject that could sell.
I want to support a foundation for wildlife conservation.
Maybe a 50 % or more.

I had thought of a Polar bear..and give the Polar Bears International the profits of the sale.

You might think, well that's nice, but believe me it is hard to give to a foundation or organization.
They think you will use the foundations name...for your profit.
I do this secretly as of now, imagine.......I can not say to whom I will make a donation publicly.
Its not for self esteem...but if the buyer knows where the profits will go.....it could be easier to sell and the funds go to where I want them to be useful.....''the animals ''.


Give me an answer..or suggestion !!!!
The '''eye of the zebra'' above was given to the WSAP years ago..for their funds campaign.
The story behind the zebra is :
In the eye you can see the reflection of a lion, The zebras last known wild mortal enemy, Befour man poached the skin for rugs.
This is the endangered Mountain zebra.....
The Mountain zebra was hunted to near extinction with less than 100 individuals by the 1930s. However the population has increased to about 700 due to conservation efforts.

The 2008 Red List was released on 6 October 2008, at the IUCN World Conservation Congress in Barcelona, and "has confirmed an extinction crisis, with almost one in four [mammals] at risk of disappearing forever" .[6] The study shows at least 1,141 of the 5,487 mammals on Earth are known to be threatened with extinction, and 836 are listed as Data Deficient.[7]


Time to do something folks !!!
Suggest me something to paint to help ( even if it is one ) the animals. ! 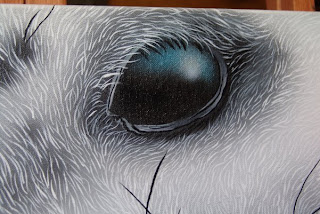 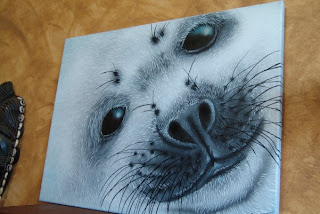 .
I did a baby Harp seal this week, and I must say I sort-of like it :)......... for once.
For the eyes I used a paint called flip-flop. It changes coulor depending on the angle you are looking at the painting.This one gives hues of blues, purple, and a touch of green.
Being a baby, we all know the eyes are blue till they get a bit older.

I am taking the weekend off from painting, but still searching for my next inspiration.

and for sale at :
http://LucieTheroux.artfire.com 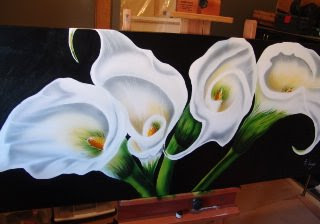 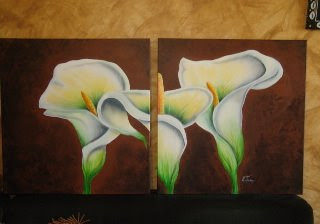 I finished working the 7th of May. My contact is finished.
I was telling myself to get in gear......'' painting ''

Well I started and finished 2 paintings already.......one last Tuesday..and the other last Thursday.
Both are large paintings..... 2 feet x 5 feet and over.
I wanted to start off slowly..........., painting flowers.
Flowers for me , relaxes me...and does not demand all the endless details of ''fur '' in wildlife paintings.

I am going to do 2 more ''flower '' paintings...then back to wildlife after....
For these 2 last ones......I have some inspirations for some semi-abstract closeups ! :-D

here are the ones I did last week.

They are for sale at My almost empty studio at artfire.
http://LucieTheroux.artfire.com
Posted by Lucie Theroux at 9:34 a.m. No comments:

I have 2 paintings in mind.....i just hope the inspiration does not die before I get my days off
work.
I am still waiting for the answer for the art grant. * sigh*
Posted by Lucie Theroux at 11:05 a.m. No comments:

The Eyes of the Future

Lucie Theroux
Quebec City, Canada
Hi ! :) I am an airbrush artist. I do mostly wild life, and endangered wildlife. When I paint wildlife, I try and capture the soul of the animal. To every animal I paint, there is a story either sad or happy outcome. Sometimes a small detail we never saw…. touches us. My reason to paint has and always is to touch people, and support the wildlife & Nature conservation.